The Cruelty-Free Revolution: All About Animal Testing And What We Can Do To Stop It 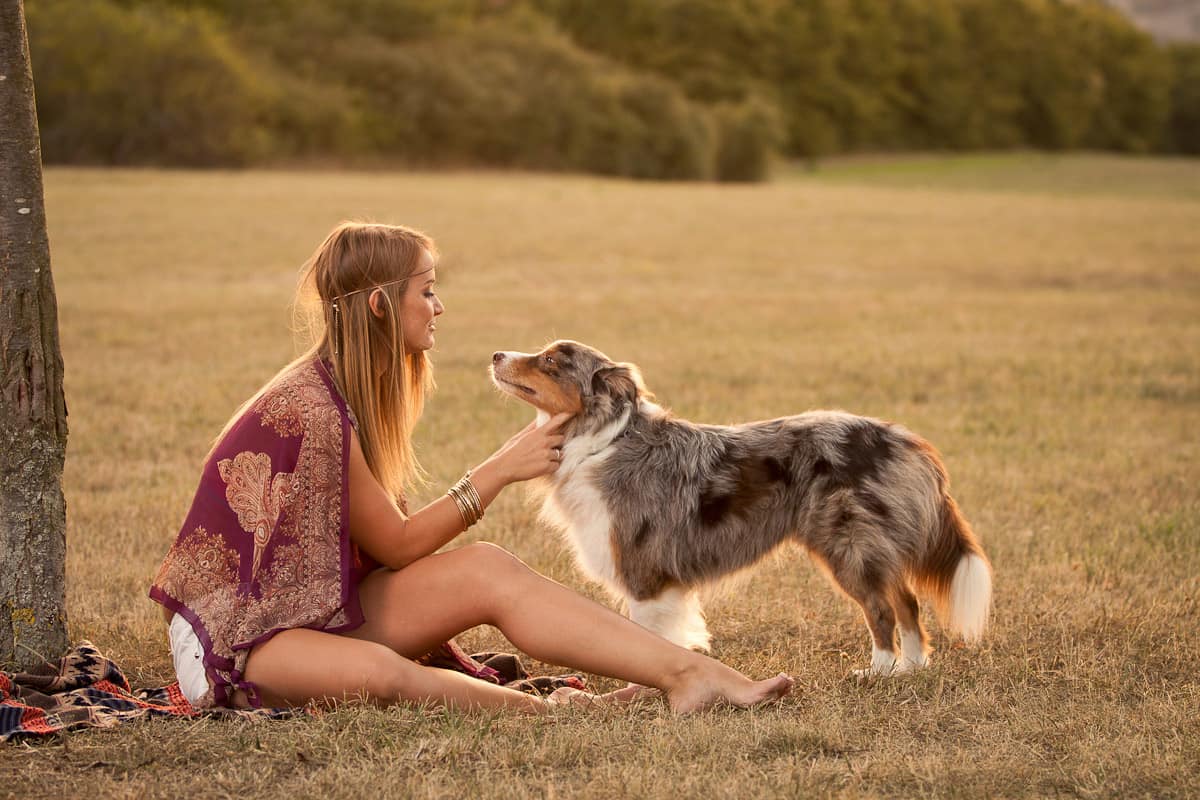 In the United States alone, more than 100 million animals are tortured and killed each year for animal testing. And you can help! There's one huge industry that's responsible for a big chunk of the animal testing going on, and that's the cosmetics industry. By buying cruelty-free cosmetics, you can help put an end to this horrific practice.

I'm going to tell you why animal testing exists and why it's a relic of the past. I'll also tell you everything you need to know about the cruelty-free world, all in one place, and show you how to make smarter, more informed choices as a consumer.

Warning: This post is pretty long. I've separated it into 3 big parts.

In Part 1, you'll learn about the origins of animal testing, what animals are used in the tests, and realize why the practice can't be justified.

In Part 2, we'll take a look at what "cruelty-free" means, what it takes for a brand to be cruelty-free, and I'll also share the best resources for finding cruelty-free brands.

In Part 3, you'll learn how to smoothly transition to cruelty-free cosmetics. You'll also see how else you can get involved and help the cause through petition, campaigns, and by spreading the word.

Animal testing has been a practice in the United States since the early 1920s. 1938 marks the year that the Federal Food, Drug, and Cosmetic Act passed in the United States, mandating animal testing to establish the safety of any new drug. It's the marketing of a poisonous drug -- Elixir Sulfanoamide, causing over 100 deaths -- that led to this act.

Since then, animals have been subjected to tests for the development of all kinds of new drugs, but also for cosmetics, household cleaning products, food additives, and pesticides. 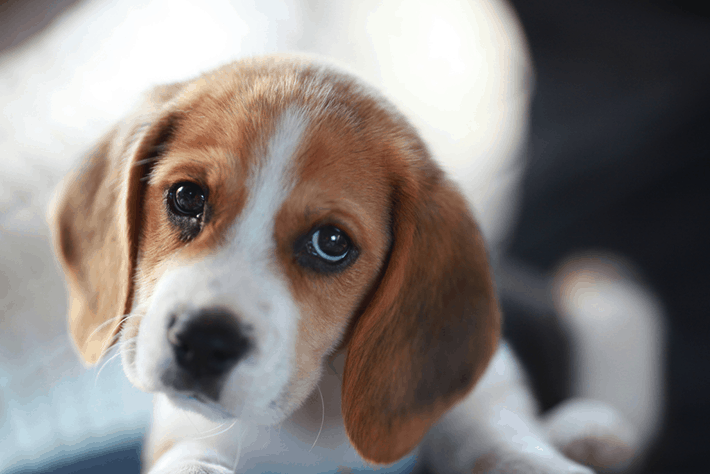 Beagles are the most used breed of dog in animal testing because of their gentle nature.

Which animals are used in tests?

Animal testing for drugs and cosmetics exists because governments needed to establish whether or not a product or ingredient is safe for public health before allowing it on the market.

For decades, this practice has been prevalent all over the world, and has been the accepted method of testing ingredients for "safety". Not only for drugs, but also for cosmetics. Even though animal testing for cosmetics isn't required by law in the United States, torturing animals is still widely used to determine safety.

As the cosmetics industry continued to evolve, new ingredients were constantly being discovered and used in beauty products. This means that a huge number of cosmetic ingredients used in makeup and skincare have been, at some point, tested on animals.

Animal testing has a long and dark history, but it doesn't have to be this way anymore. Together, we can transition towards a cruelty-free world, which is what I call the Cruelty-Free Revolution. This revolution marks the end of a cruel and barbaric age, and the beginning of a new, more humane era.

There's nothing that justifies animal testing in the 21st century. It's a cruel and outdated practice that's not only unethical but also unnecessary. 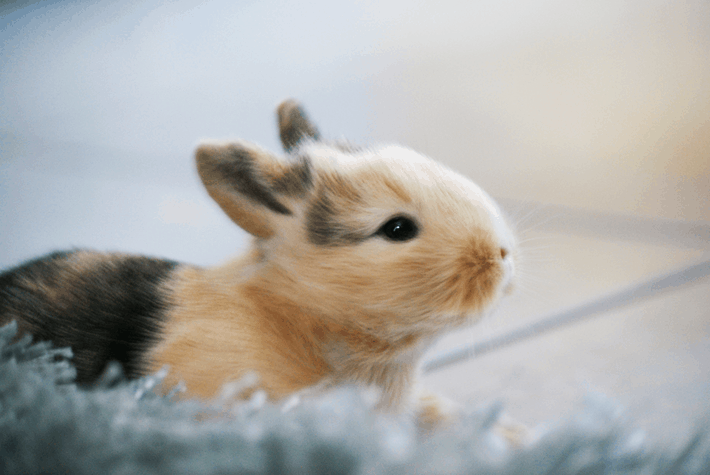 This is all to say that being against animal testing is not only a moral position, but it also makes sense. It's the humane and rational position to have. My position is simple: 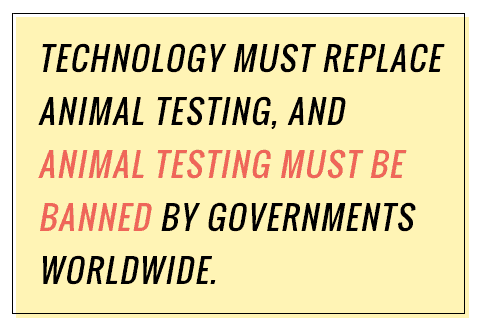 This is why it's so important for today's consumers to pay closer attention to which products they're purchasing, and therefore which companies they're supporting. By choosing cruelty-free brands, you're (very politely) giving the finger to the animal testing industry, and informing the beauty world that animal testing will no longer be tolerated.

How do you know you're really making a difference by supporting cruelty-free brands? Because customers dictate the market.

If enough of us purchase from cruelty-free brands and boycott those that test on animals, it means things are going to change. If L'Oreal did their market research today and 98% of those interviewed claimed that they would never buy a product that was tested on animals, L'Oreal would reconsider their position. Hard. Because they want to sell their products. That's all that matters to a big business!

So trust me, your choices are making a difference. We all are, together. Tell your friends about animal testing, make your position known!

What does "cruelty-free" mean?

There are a few misconceptions about the word, so let's all get on the same page!

A "cruelty-free" company is a company that doesn't test its products on animals. Cruelty-free only refers to the animal testing aspect of animal cruelty.

Then how can we determine if a company truly is cruelty-free?

Through independent research and organizations. This is where blogs such as this one come in handy. There are several criteria to consider if you want to know if a company is 100% cruelty-free.

In recent years, several companies have decided to enter the Chinese cosmetics market, which is booming to an insane degree. But there's a problem:  Animal testing is required in China by law for foreign cosmetics companies, where an estimated 300,000 animals die in labs every year. This means: If a brand is sold in mainland China, it's not cruelty-free. Read my in-depth post about animal testing in China here.

One more thing you should keep in mind is the parent company of the brand in question. Some brands are completely cruelty-free, while also being owned by a brand that tests on animals. While this doesn't mean that the company is question has lost its cruelty-free status, you should still bear it in mind. I personally prefer supporting independent companies if given the choice, but I still view ALL cruelty-free brands as cruelty-free. Read more about this here and share your thoughts.

The Resources You Can (And Can't) Trust

When you're shopping in stores, look for the 3 logos below -- and only these. You can find more information about cruelty-free logos in this post: How To Spot a Fake Cruelty-Free Logo. There's more to cruelty-free cosmetics than this, but this is a good guideline. 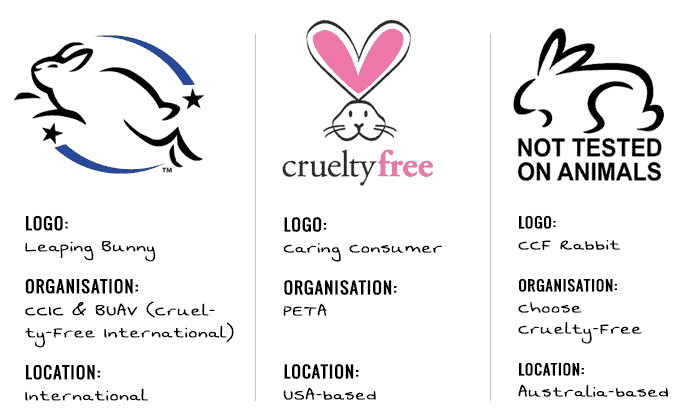 If you're not familiar with these organizations, please read this post first. I have addressed the somewhat controversial topic of which organization to trust between the Leaping Bunny and PETA in this post as well as this one.

PETA is one of the most well-known animal rights organizations. Based on all the reading I've done on PETA, I can't say that I support them. In fact, it doesn't look like PETA cares about animals that much, but I digress. To keep things objective: their Caring Consumer cruelty-free list is an okay place for any beginner to start as long as you can supplement it with additional research or sources. PETA is also fine as a source of information.

Nevertheless, their Shopping Guide consists of hundreds of small to medium brands, and a few bigger ones. It's therefore a good source to consider for smaller brands, as long as you keep in mind the above fact. For information on animal welfare, there are a few sites I like to visit frequently -- I've listed them all below as well. 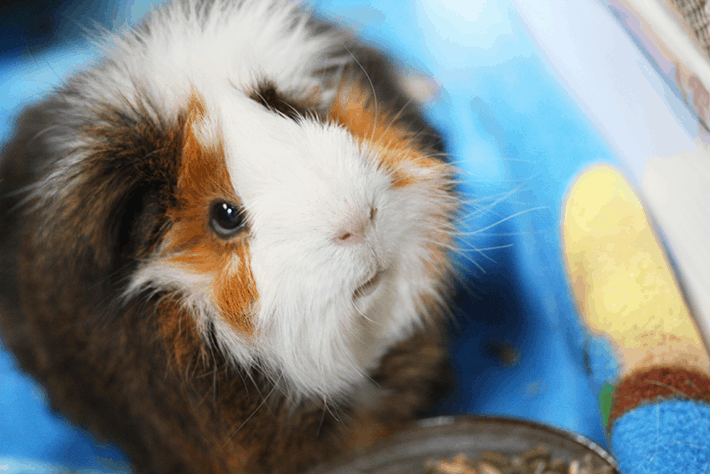 The cruelty-free list I'm curating contains brands that can be found on PETA's list, on Leaping Bunny's list, or nowhere else -- because I do my own research. The companies you can find on it are mostly well-known, but I also include emerging small companies and indie brands. My aim is to be transparent so that you can use it as your own tool. This is why I include correspondence with companies, which you can see by clicking the little envelope icon next to the brands that have one.

I also have a list of drugstore brands, where I include every single brand sold in drugstores and share its cruelty-free status as well as correspondence whenever possible. If you're into mid-range and high-end brands, check out my list of cruelty-free brands sold at Sephora. Here are links to all these lists:

So you want to take the next step and join the cruelty-free revolution?

First, make a change in the products you buy. Encouraging cruelty-free brands is crucial in working toward making a change. Second, do all you can to help change the animal testing laws. I very strongly believe that governments are largely responsible for the animal testing going on, and that animal testing bans must be issued.

Private companies are driven by profit. By showing them that "cruelty-free" is essential when selling their products, they'll start considering it. But if a ban on animal testing is issued, they'll have no choice but to ditch it.

First of all, assess your stash. Look at all your makeup, skincare, shower essentials, toothpaste, deodorant -- and don't forget your cleaning supplies, which are often subjected to cruel animal tests.

Are most of the brands you use found on the cruelty-free lists mentioned above? If not, don't throw anything away. That's wasteful and silly. Simply use up your products and make more conscious decisions on future purchases.

If you have a favorite product you just can't live without from a brand that tests on animals, do some research to find a cruelty-free alternative. I also wrote a little walkthrough for beginners with my suggestions for skincare, body care, personal care, makeup, and everything else you might need.

You can make the decision of going cruelty-free right here, right now. All you have to do is make better choices on future purchases and stop repurchasing products that are tested on animals. It might not be easy, but it's well worth it.

One of the best ways to get involved is to spread the word about animal testing and shopping cruelty-free. Let your friends and family know how bad it really is. The more people become educated, the closer we'll get to an animal testing ban. 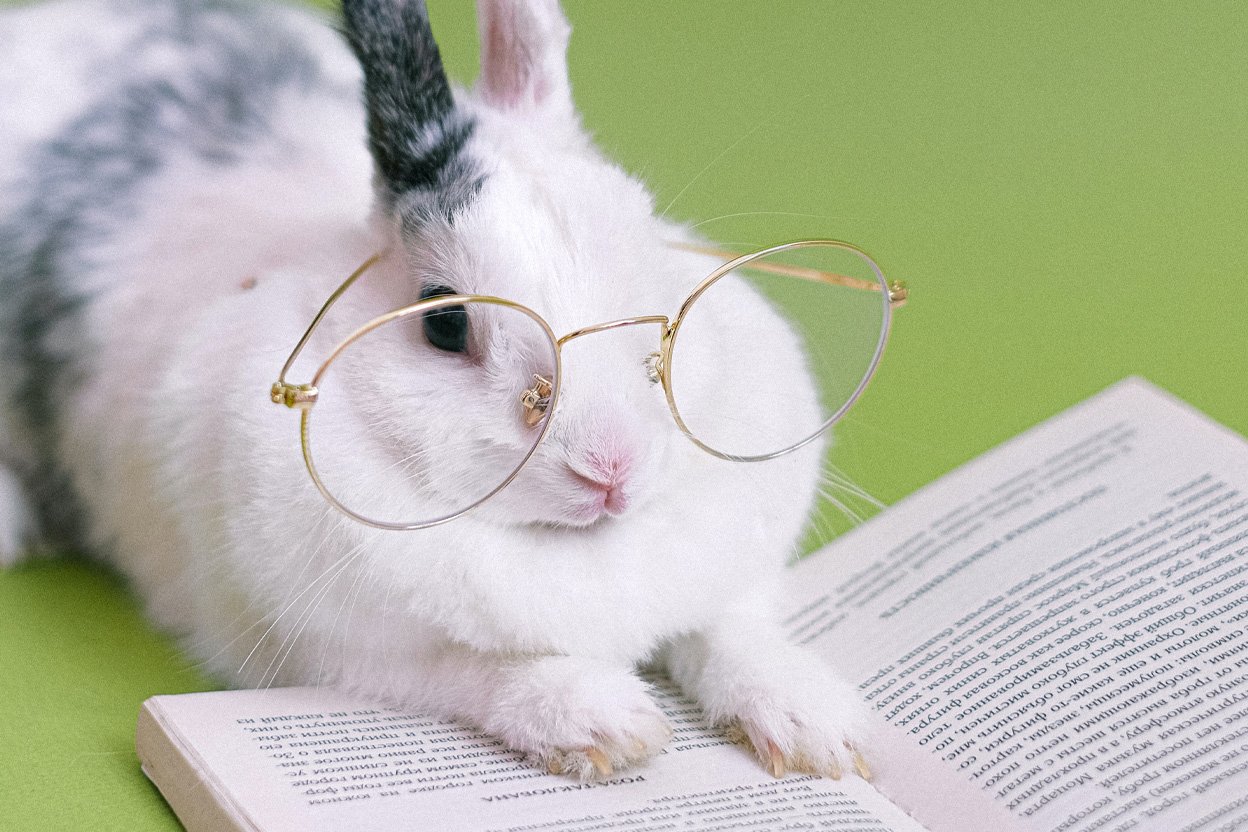 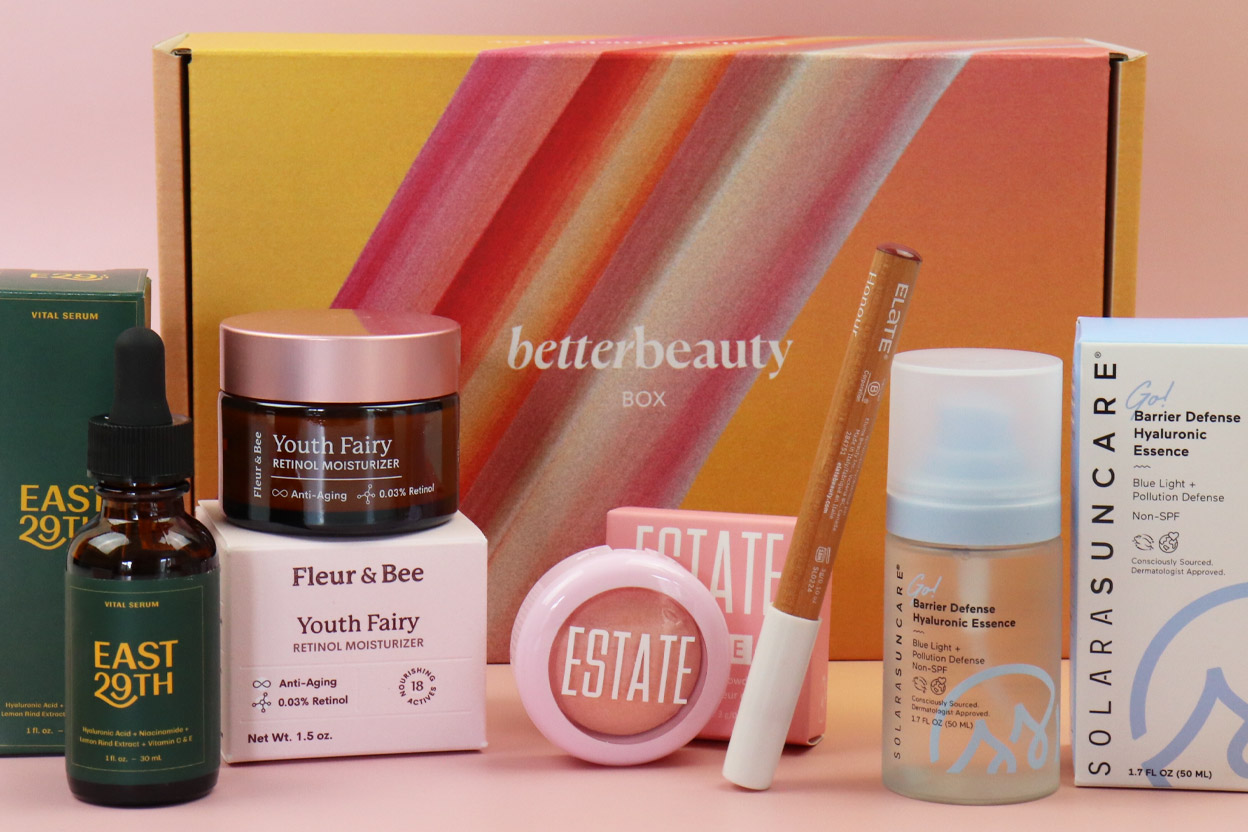