Origins is NOT cruelty-free.

Origins is owned by Estée Lauder, a company that is not cruelty-free.

“Our belief is that science can end animal testing.

We don’t believe in testing on animals. We believe in the power of nature and the proof of science. And we know science has proven it’s unnecessary to test products for safety on animals. So we don’t do it. Instead, we use volunteers to test out our products. And they help us make sure everything is totally safe for you.

Some countries where Origins is sold require animal testing on all imported cosmetics as part of their regulator safety process. As a brand rooted in science, we’re doing everything we can to put an end to animal testing worldwide through science. That’s why we’re partnering with The Institute for In Vitro Sciences (http://wwww.iivs.org) in their mission to ensure alternative testing becomes the global standard.”

We can find Origins’ animal testing policy directly on their website by looking at their FAQ. This is what they claim under the “Animal Testing” section: 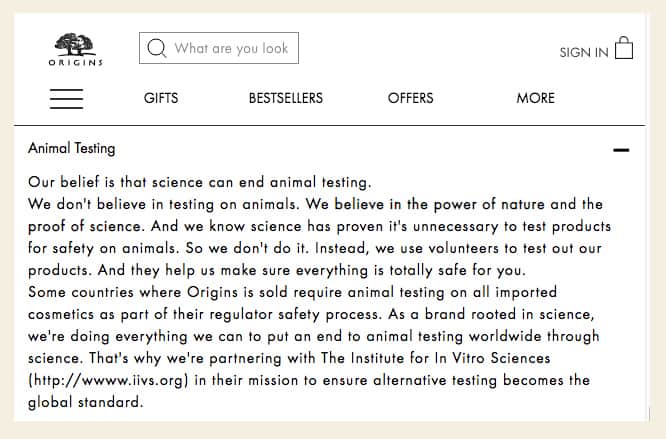 Origins was founded in 1990 by the Estée Lauder group. They offer skincare, makeup, and body care products that are “plant-based” (although they’re not vegan since they contain honey and beeswax). They are committed to planting trees in partnership with nonprofits.

Why We Classify Brands Like Origins As “Not Cruelty-Free”