MAC is NOT cruelty-free.

MAC isn't owned by a parent company that is not cruelty-free.

“M·A·C does not test on animals. We do not own any animal testing facilities and we never ask others to test on animals for us. While some governments conduct animal testing to prove safety before they will allow us to sell our products, M·A·C has never tested on animals and we continue to be a leader in the movement to end animal testing globally.  To this end, we are proud to partner with IIVS (INSTITUTE FOR IN VITRO SCIENCES) to expand the use and acceptance of non-animal testing methods worldwide.”

This policy is misleading, as MAC is minimizing their involvement in animal testing, and is using strong language to imply that they’re a fully cruelty-free brand. This is false. They claim that “some governments conduct animal testing” in order for cosmetics to be sold in those countries. The country in question is mainland China, where MAC sells products.

In order for brands like MAC to be sold in China, they must comply with mandatory animal testing. Although it’s true that it’s the Chinese authorities that handle these animal tests, the company must nonetheless willingly agree to them, and pay for them.

Even though MAC is trying to distance themselves from the “animal testing” involved, they most likely paid for their finished products to be tested on animals in China. Companies that are cruelty-free do not sell in countries where animal testing is required by law. Instead, they find alternatives such as e-commerce. If a brand sells products to China online only, these products are not subject to animal testing, and the brand can therefore remain cruelty-free. 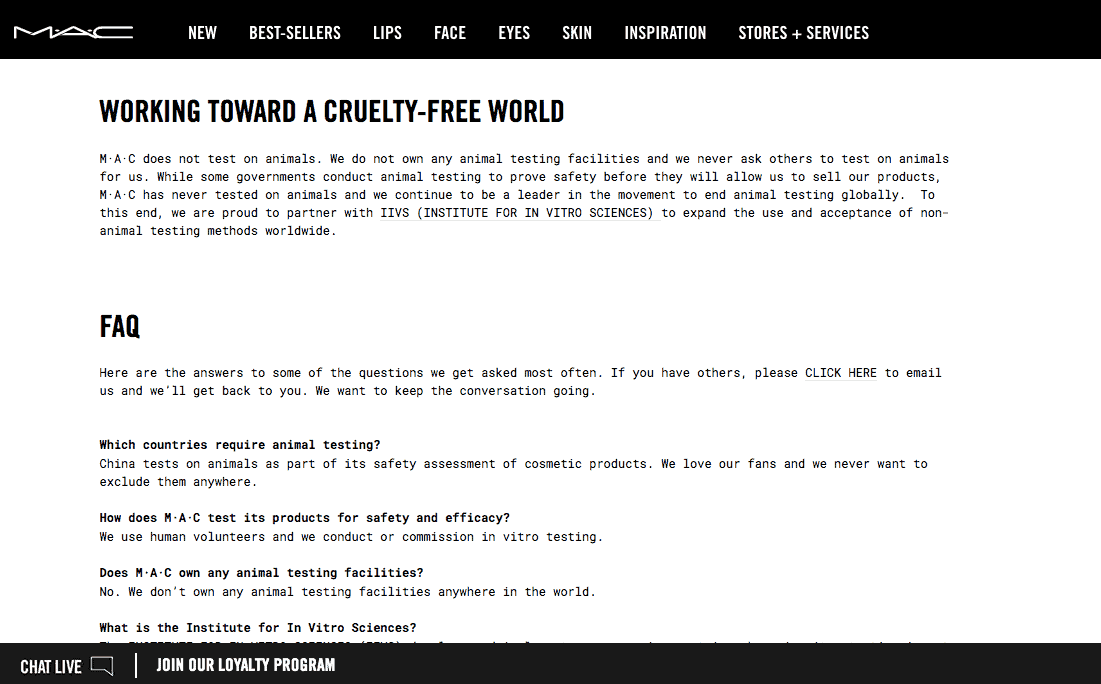 “Which countries require animal testing?
China tests on animals as part of its safety assessment of cosmetic products. We love our fans and we never want to exclude them anywhere.

How does M·A·C test its products for safety and efficacy?
We use human volunteers and we conduct or commission in vitro testing.

What is the Institute for In Vitro Sciences?
The INSTITUTE FOR IN VITRO SCIENCES (IIVS) develops and implements programs in countries where in vitro testing is not accepted in order to educate scientists on the scientifically validated safety record of these methods. We are proud to announce a new partnership with the INSTITUTE FOR IN VITRO SCIENCES (IIVS) to help ensure that alternative testing becomes the global standard. By funding IIVS’s International Outreach Program (IOP), we are working to make a difference. The IOP provides a wide array of support including technical assistance in the form of lectures, workshops and hands-on training sessions to countries that rely on animal testing to determine the safety of products or ingredients.”

MAC is a popular makeup brand available worldwide. They have standalone stores, and they’re available in department stores such as Nordstrom, Bloomingdale’s, and Macy’s. The brand was founded in 1984 and was acquired by Estée Lauder in 1994. MAC frequently collaborates with celebrities such as Mariah Carey, RuPaul, or Selena.

Why We Classify Brands Like MAC As “Not Cruelty-Free”