I’m happy to announce that I added Natasha Denona to my list of cruelty-free brands! This pro makeup brand has been gaining in popularity recently and I’ve been getting requests to look into it.

In short: Natasha Denona addressed all my questions, and their answers point to being a cruelty-free brand. Here are the facts:

Here’s their reply, where they address everything from suppliers to “required by law” testing:

Thank you so much for reaching out!

We are happy and proud to inform you that none of our ingredients suppliers, nor our manufacturers are practicing any kind of animal testing! We ourselves, and especially Natasha, are against these horrible methods.

The origins of our ingredients are from Germany, France, Italy and the US. Our products are manufactured in Italy. For your information, testing cosmetics on animals in Europe is against the law.

Keep in mind that Natasha Denona isn’t Leaping Bunny-certified. If this is a deal breaker for you, be aware! They also haven’t signed PETA’s pledge of no animal testing, and can’t be found anywhere on PETA’s Caring Consumer list. 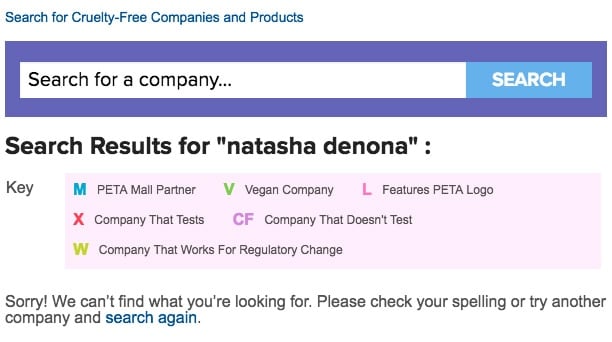 Although Natasha Denona isn’t certified, their answers indicate that they’re 100% cruelty-free. However, you should know that they’re not vegan, as some of their products contain Beeswax and Carmine.

I asked for a list of Natasha Denona’s vegan products, and this is what I was given. Since they’re all individual shadows and most eyeshadows come in palettes, it’s hard to make out what’s vegan and what isn’t. If you have more info, let me know in the comments below.

You can find Natasha Denona makeup at Sephora!

P.S. Click here to check out what other brands are cruelty-free at Sephora!

Have you tried Natasha Denona makeup?