Is There Such Thing As Cruelty-Free Eggs? 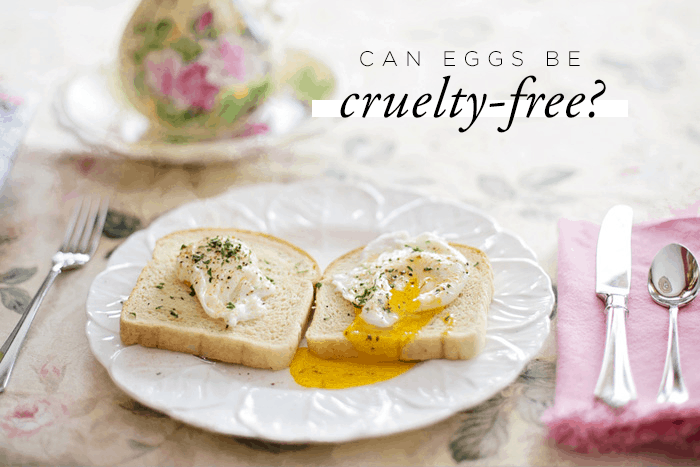 In terms of cruelty to animals, the egg industry is one of the biggest offenders. To start, hens are subject to torture, confinement and deprivation, since they are seen as cogs in a factory rather than living beings. Terms like "cage-free" and "free-range" target the consumer to make them believe they are making a more ethical choice at the store, when in reality the conditions aren't any better for the chickens.

Plus, in order to meet the large demand for eggs, farmers have bred chickens to lay 10-30 times what nature intended, which has a lot of negative effects on their bodies. After a couple of years, they can no longer physically sustain the abnormal egg-laying demand and are then killed several years before the end of their normal lifespan.

Without going into too much detail, one of the saddest truths of the egg industry is that the male chicks that are born are not useful to the industry (unable to produce eggs and unusable for meat), so they are treated as a byproduct and therefore killed upon hatching. Now that factory farming information and footage have become more widely available to the public (you can't miss it when scrolling through your social media feed these days), people are starting to look for humane and "cruelty-free" alternatives to eggs.

First, there is the idea of "backyard" farming. Although this sounds more comforting, the fact is that these chickens are subject to the same suffering as factory farmed chickens, and their treatment is often less regulated. Even if the chickens are treated as well as a beloved pet, they are still purchased from chicken breeders or from other farms, and most often shipped in the mail (!) to get to their new homes, which of course can have its risks. Justin Van Kleeck, Owner of the Triangle Chance for All Sanctuary, says it best:

"To consume eggs, even from rescued chickens, is to legitimize and perpetuate this suffering."

Some argue that a more humane option would be to consume eggs directly from farm animal sanctuaries. In these sanctuaries, the hens have been rescued from the farming industry, yet are still laying a large volume of eggs. So it seems it would only make sense to eat those spare eggs, right? Unfortunately, it's not so simple. While this would, of course, be a more humane alternative to purchasing eggs from farms (factory, backyard or otherwise), it still involves viewing the chickens as products for human consumption and therefore exploiting them in the process.

At many farm animal sanctuaries, the eggs are actually fed back to the hens who laid them to help replenish the severe nutrient deficiencies that result from the egg-laying process. Here Kaden Maguire, the Education Coordinator at Catskill Animal Sanctuary, goes into greater detail:

This intensive egg-laying takes a huge toll on the bodies of hens, causing early osteoporosis, egg yolk peritonitis, and extremely high rates of reproductive cancers. There isn't much that we can do to stop hens from laying eggs. While there are now hormonal birth control implants that can be given to hens to keep them from ovulating, it's still very expensive and needs to be replaced frequently, and therefore cost prohibitive for most sanctuaries. Short of an implant, the best thing that we can possibly do for our birds is to feed them back some of the nutrients sucked from their bodies during the egg-laying process."

Farm Sanctuary, the nation's largest farmed animal rescue organization, also feeds the eggs back to the chickens, as well as other rescued birds:

"We hard boil the eggs laid by the chickens, turkeys and ducks and we feed them to the industrial layer chickens (smashed up-shell and all). Egg laying chickens have been bred to lay more eggs than their bodies can handle. Often calcium is drawn from their skeletons to form eggshells, which weakens their skeletons and can cause osteoporosis. Eating the eggshells helps to replenish the calcium in their bodies."

In addition, while gathering eggs from sanctuaries sounds nice in theory, it's not a sustainable option to fill the demand for eggs from the masses. Think of all the restaurants, bakeries, factories and even hospitals that use huge quantities of eggs on a daily basis to fill the demands of their customers. It simply wouldn't be possible to fill those demands with sanctuary eggs.

All ethics aside, many recent studies have shown that eggs may not be the "health food" they're cracked up to be. Besides the obvious potential for salmonella, they also contain high levels of cholesterol, which increases the risk for cancer, diabetes and heart disease. Author Dr. John MacDougall goes into more depth in his latest book The Healthiest Diet on the Planet:

"Of all the foods commonly consumed as part of the rich Western diet, eggs contain the highest concentrations of cholesterol. Eggs contain eight times more cholesterol than beef. Traditionally, in scientific studies on humans, eggs have been used as the source to demonstrate the adverse effects of cholesterol on our health and our heart arteries. In response, the egg industry has purposely misled the public and its practicing physicians about the harmful effects of eggs, which are poisonous when consumed in the high amounts typical of American diets...Indeed an egg is the richest of all foods---and far too much of a "good thing" for people."

Susan Levin, MS, RD, Director of Nutrition Education at the Physicians Committee for Responsible Medicine, explains why this is not good for the human body:

"Eggs have zero dietary fiber, and about 70 percent of their calories are from fat—a big portion of which is saturated. They are also loaded with cholesterol—about 213 milligrams for an average-sized egg. For reference, people with diabetes, cardiovascular disease, or high cholesterol should consume fewer than 200 milligrams of cholesterol each day. (Uh oh.) And, humans have no biological need to consume any cholesterol at all; we make more than enough in our own bodies." So, what are the healthier (and cruelty-free) alternatives to eggs?

For scramble, stir fry and other similar applications, there is of course tofu. It is incredibly inexpensive, has nearly 20g of protein per serving and contains 0g cholesterol! I recommend Minimalist Baker's amazing recipe for Southwest Tofu Scramble (pictured above).

Follow Your Heart has also developed a "VeganEgg", which looks, tastes and smells (yup) exactly like eggs. It can be used for scrambles, omelets, french toast, quiches, custards and even baking!

In terms of baking, there are a lot of options to replace eggs and still provide the structure, binding and leavening needed. There are flax and chia seeds, both of which are great sources of Omega 3. (For one "egg", simply mix 1 tablespoon flax or chia with 3 tablespoons water and let it sit for a few minutes before mixing in with the rest of the ingredients.) If another leavening agent is present in the recipe (i.e. baking soda or baking powder), then applesauce or mashed banana can also be great options to make baked goods extra delicious and moist.

For egg whites, "aquafaba" (AKA the liquid from a can of chickpeas) is a perfect substitute. It whips up just as egg whites do and can be used in sweet and savory recipes. It even works perfectly for meringues and homemade marshmallow fluff!

By making small changes and incorporating more of these cruelty-free alternatives into your routine, you can make a big difference. Juli Kaiss from Farm Sanctuary explains why these choices make such an impact:

"Supply is driven by demand and the more we vote with our dollars and show that there is a demand for plant-based foods – and alternatives to all animal products – the more these products will be produced and made readily accessible."

In my opinion, eggs cannot be truly cruelty-free. For me, it's hard to overlook the countless ethical, environmental and health issues. While I choose not to consume them, it is of course up to you to do what you feel is right!