Benefit is NOT cruelty-free.

Benefit is a mid-range makeup brand which is available in over 30 countries, including China. They specialize in cheek and brow products, though they have a full line of products. The company was acquired by LVMH, owner or Sephora, in 1999.

“Benefit does not test our products on animals.

Since 1989, the Perfumes & Cosmetics companies of LVMH group (including Benefit Cosmetics) have not performed any tests on animals for our products – this was implemented long before the 2013 official ban set by the European Union.

We are deeply committed to the elimination of animal testing. We’re playing a leading role in developing alternative methods through our support of the “Fund for Alternatives to Animal Testing” in the United States. We also actively participate in validation studies of new alternative tests in the framework of the European cosmetics association, Cosmetics Europe. We are one of only a few companies to have invested in creating our own internal department to test raw materials and ingredients to further ensure the quality of our products and the satisfaction of our customers, which is our top priority.

As a result, all Benefit products undergo very strict tolerance tests using non-animal methods during the development of each product to ensure quality and safety prior to market.

Some customers expressed concern regarding the situation in China. Our products are made in Europe and for imported cosmetics, the Chinese health authorities order some test on animals: they require companies to make their products available to be tested in state-certified laboratories for registration purposes only, as it is currently their only recognized method to demonstrate product safety .

We are hopeful that alternative testing methods will be adopted worldwide and we will see an end to animal testing.”

First of all, Benefit claims that they themselves do not test on animals. This claim alone does not make Benefit a cruelty-free company. Companies that are truly cruelty-free must also confirm that their suppliers and any third parties do not engage in animal testing, anywhere in the world, and that their products are not sold in mainland China.

Third, Benefit finally addresses their involvement in animal testing in China. They clearly state that they paid for animal tests to be performed on their products in the country. This means that no matter how “committed” benefit claims to be when it comes to eliminating animal testing, they’re showing their hypocrisy: Benefit does test on animals where required by law, and is therefore not a cruelty-free company. 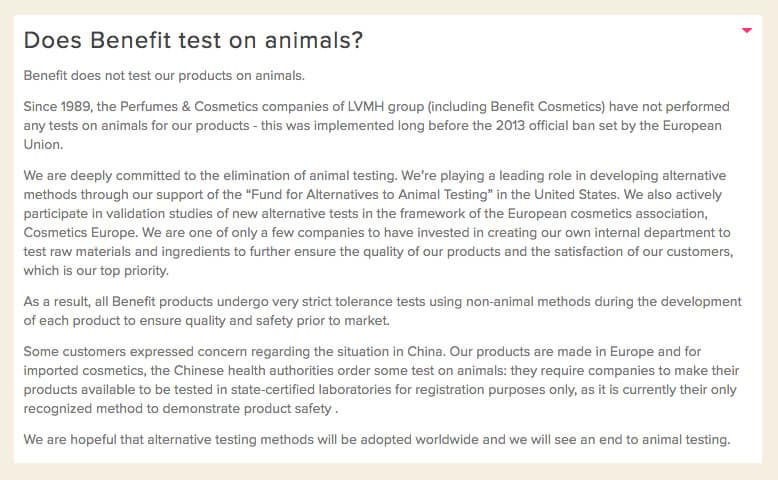 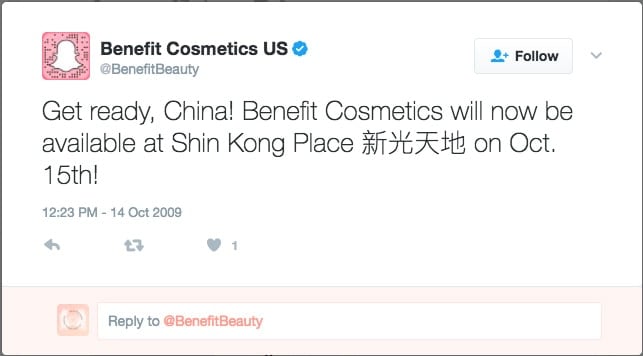 Shin Kong Place is a high-end department store in Beijing, mainland China. Benefit has been present in China for over a decade now. They can also be found at Chinese Sephora stores:

Why We Classify Brands Like Benefit As “Not Cruelty-Free”