Benefit is one of those companies that most people assume are cruelty-free, but unfortunately, they’re wrong. If you’re new to the cruelty-free world, keep reading to find out why Benefit can’t be considered cruelty-free.

Benefit give us some information about their animal testing policy in their FAQ. It reads:

Does Benefit test on animals?

Benefit does not test our products on animals.

Since 1989, the Perfumes & Cosmetics companies of LVMH group (including Benefit Cosmetics) have not performed any tests on animals for our products – this was implemented long before the 2013 official ban set by the European Union.

We are deeply committed to the elimination of animal testing. We’re playing a leading role in developing alternative methods through our support of the “Fund for Alternatives to Animal Testing” in the United States. We also actively participate in validation studies of new alternative tests in the framework of the European cosmetics association, Cosmetics Europe. We are one of only a few companies to have invested in creating our own internal department to test raw materials and ingredients to further ensure the quality of our products and the satisfaction of our customers, which is our top priority.

We are hopeful that alternative testing methods will be adopted worldwide and we will see an end to animal testing.

If you only read this statement, you’ll probably assume that Benefit is a cruelty-free company. However, they didn’t address the full picture. What they’re telling us is that their finished products aren’t tested on animals by them, which is the case for most cosmetics companies today.

The last sentence however hints towards something else. They’re saying that they’re “hopeful that alternative testing methods will be adopted worldwide”. Why is benefit so hopeful? Because they sell in markets which require animal testing by law.

Mainland China (the Chinese territory excluding Hong Kong) requires all foreign cosmetics companies to comply with their animal testing laws in order to sell their products there. This means that any American or European cosmetics brand that wishes to enter the Chinese market must agree to have their products tested on animals. Not only that, but they also pay for these tests.

So when Benefit tells us they’re “hopeful that alternative testing methods will be adopted worldwide”, what they’re telling is that they test on animals where required by law, and sell their products to mainland China. If you ask me, it’s a subtle and misleading way of putting it.

How do we know that Benefit tests on animals where required by law? Because they previously stated so explicitly on their FAQ.

In 2014, the opening sentence in their animal testing policy stated: “We do not test our products on animals nor do we permit others to do so except where it is required by law.”

In 2017, this sentence was cut to: “Benefit does not test our products on animals.”

Benefit also admits to selling in mainland China, which they have been doing for years. This tweet is from 2009: 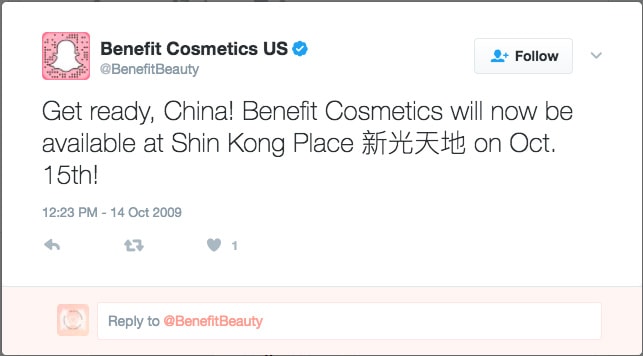 Updates To The List Of Cruelty-Free Brands: Ouai, Jouer, The Ordinary, and More!

Even with the changes made to their FAQ, Benefit’s real animal testing policy is the following, as stated in this tweet from 2015: they don’t test on animals unless required by law. 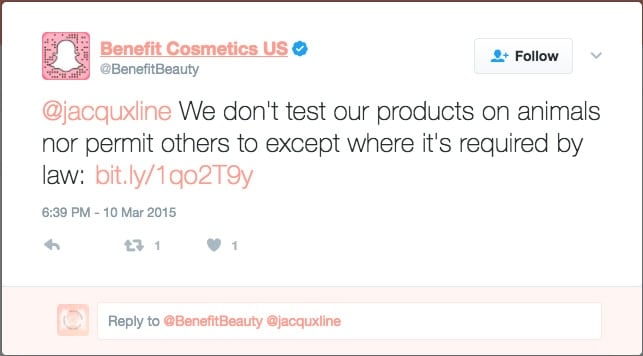 They’re also listed on PETA’s list of companies who test on animals: 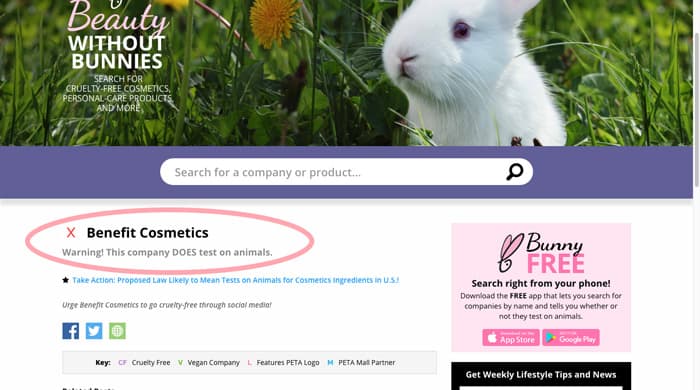 Benefit is NOT a cruelty-free company and they DO test on animals where required by law. Their current FAQ is misleading and doesn’t give us the full details of their policy.

If you’re a fan of Benefit Cosmetics, please contact the company directly and ask them to pull out of mainland China in order to gain their cruelty-free status. If Benefit stops selling products to mainland China, they will become a cruelty-free company. If you’re boycotting the brand until they go cruelty-free, let them know! The more people reach out to Benefit, the more chances of them listening and completely ending their animal testing.

30 Makeup Brands That Still Test On Animals In 2019