Ask Suzi: What’s The Difference Between Cruelty-Free And Vegan?

I’ve been getting a lot of questions and, well, opposition to Mary Kay being on my list of brands that test on animals.

After looking into this company, I can see that they’re very vocal about them “not testing on animals”, so this might come as a shock to some: Mary Kay tests on animals where required by law. And unfortunately, they do sell in mainland China.

As you know, companies that test on animals where required by law are never considered “cruelty-free” by myself or any organization. This is because they willingly choose to pay for their finished products to be tested on animals in order to sell in China. These animal tests can be avoided by refusing to sell in China, and many companies popular brands refuse to sell in that market for this exact reason.

Note that May Kay is also an MLM company (Multi-Level Marketing, also known as a pyramid scheme).

From Wikipedia, we learn that Mary Kay was among the first beauty brands to drop animal testing:

In 1989 the company announced a moratorium on animal testing of its products, after pressure from animal rights groups. They were among the first in their industry to do so and to sign the PETA pledge.

This might explain why being cruelty-free is a part of the company’s ethos and culture, but the sad fact is that Mary Kay went back to animal testing in 2012 when they joined the Chinese market.

Mary Kay currently has a presence in more than 35 countries, including China.

Because animal testing is required by law for foreign cosmetics selling in China, they forfeited their cruelty-free status in 2012. They’ve also been removed from PETA’s cruelty-free list. 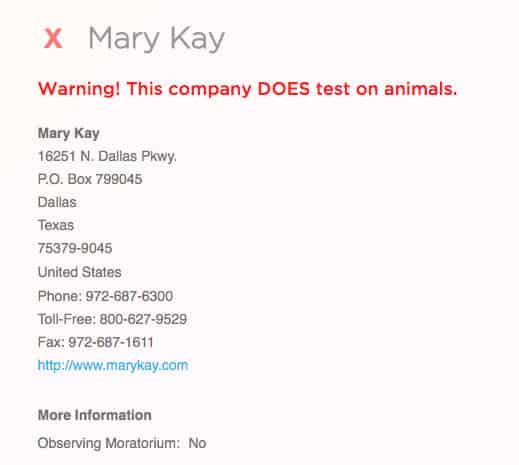 “Mary Kay does not conduct animal testing on its products or ingredients, nor ask others to do so on its behalf, except when absolutely required by law. There is only one country where the company operates – among more than 35 around the world – where that is the case and where the company is required by law to submit products for testing – China.”

The source can be found here.

It’s too bad that a company who was among the first to put an end to animal testing decided to take a step back. Mary Kay isn’t cruelty-free, and I won’t be supporting this company.