I sent a poll to over 10,000 readers asking you one simple question: What’s your favorite mascara, and why?

Thank you to the ladies who participated by sharing their holy grails with us! You’re helping more caring shoppers find cruelty-free options.

Results Of The Poll

I won’t lie, I was surprised by the results!

One mascara won by a landslide and got a big majority of the votes, and that’s the Too Faced Better Than Sex mascara. 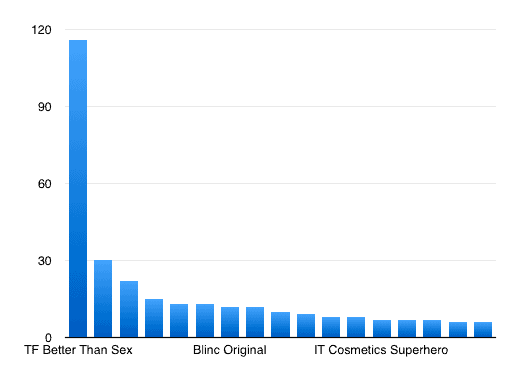 I expected the results to be more competitive, but the winner is clear.

P.S. Don’t dismiss the mascaras at the bottom of the chart! They still received plenty of votes and they might work better for your specific lashes.

For this post, please keep in mind that I’m going to include ALL cruelty-free brands, even those owned by a parent company who tests on animals (which will be marked with a *).

I recommend you first choose a brand that isn’t marked with an asterisk (*). All brands mentioned are still cruelty-free themselves and don’t sell their products to mainland China.

The clear and undisputed winner is the Too Faced Better Than Sex mascara! It received as much as 4x the votes of the runner up.

You all loved this one, and being fully honest, it’s also my favorite! It was still pretty crazy how many girls raved to me about this one.

This mascara has stiffer bristles and a thick formula, as well as an hourglass-shaped brush that coats ALL your lashes without effort. It promises an intense, “deepest black” as well as curl, separation, and volume.

“It is honestly the best mascara that I’ve ever tried, even including the ones I used before I made the decision to go cruelty free. It makes your lashes extremely full, long and doesn’t clump.” -Michelle

“It’s the only mascara that gives me long, thick, beautiful lashes. Nothing else comes close for me.” -Amy

Tarte Lights Camera Lashes also racked up a lot of votes and came in second place.

It promises to lengthen, volumize by 330%, curl, and condition your lashes.

“This mascara is literally magic in a little purple tube.” -Dakota

“It gives me both volume and length without the raccoon eyes I get from other cruelty-free brands.” -Keetja

“It separates my lashes and holds a curl awesomely.” -Arianna

Another answer I saw over and over is Urban Decay’s Perversion mascara.

Note: Urban Decay’s parent company L’Oreal is not cruelty-free. Also, this mascara is not vegan as it contains honey extract.

With a big fluffy wand, it promises “bigger, blacker, badder” lashes. The formula is neither too dry nor to wet to minimize clump and hold a curl.

“Perversion is perfect for skimpy lashes like mine. One coat is usually plenty, but multiple coats works too without clumping or flaking.” -Pam

“Love this one for drama, longevity, and an intense black sexy eye.” -Kitty

“Urban Decay’s lengthens my lashes like no other mascara I’ve ever tried and doesn’t clump.” -Karina

In fourth position we have Pacifica’s Aquarian Gaze Mascara, which is also the number 1 waterproof mascara on this list.

The waterproof formula is long-lasting, and the wand helps to lengthen, separate, and build volume. This is a natural mineral mascara that’s also vegan.

“It’s the only mascara I’ve found that stays in place all day, doesn’t smudge, doesn’t flake, and has the perfect formula-wand combination.” -Alicia

#5 | Too Faced Better Than Sex Waterproof*

The waterproof version of Too Faced’s Better Than Sex mascara is another favorite.

It’s similar to the original formula, but it’s not quite the same. It’s very waterproof, long-lasting, and especially recommended for those who want curl.

“Awesome for a fake lash look without fake lashes.” -Lorraine

“It is the only mascara that can keep my super-straight lashes curled all day. I don’t need an eyelash curler anymore.” – Laurence

ELF mascaras are super budget-friendly (we’re talking $1-$3 each) and they received a lot of love! The top pick is their Mineral Infused mascara.

This mascara promises “fuller, healthier-looking lashes” and uses a silicone brush to eliminate clump. Did I mention it’s only $3?

“Makes my lashes dark and dramatic, and no irritation AT ALL.” -Anna

Blinc stands out from other mascaras because it uses “tube-technology”. This means that it doesn’t just “paint” your lashes, but rather, it forms tiny tubes around them. This makes the mascara more resistant, and it’s also waterproof.

To remove it, you don’t need makeup remover! Using warm water and slight pressure does the trick, and you’ll see the little tubes roll off your lashes.

Gimmicky or innovative? Many ladies seem to love it!

“This mascara genuinely doesn’t come off until you take it off with warm water. It easily lasts all day.” -Lulu

“This is the only cruelty-free mascara the absolutely will not smudge on me. No raccoon eyes!” -Teresa

This mascara does everything! It adds volume, length, and even conditions your lashes. It uses natural ingredients and it’s vegan, as is all of Pacifica’s collection.

The wand of this mascara stands out. It’s double-sided, meaning you can get different results depending on which side you use.

“I adore Pacifica, and this is my favorite product they make!” -Myriam

There’s 3 version of the NYX Doll Eye mascara: a volumizing one, a lengthening one, and a waterproof one. Most of the answers didn’t specify exactly which version they love best, but all 3 mascaras have great reviews.

” It actually separates my lashes instead of clumping them, and makes them look nice and long. I’ve gotten compliments!” -Alyssa

“Gorgeous mascara. It adds volume and length without clumping!” – Trish

“It lengthens my lashes perfectly!” -Chyna

This one’s another great drugstore mascara that does what it promises at a low price. It promises “majestic volume” and length, and the shape of the brush helps grab every individual lash.

“It makes my eyelashes gigantic with just one coat and it’s only like $4!” -Rita

“I love the volume and the price point is excellent.” -Leighanne

This mascara gives you a super black and dramatic look for “thicker, sexier-looking lashes”. It’s also lengthening and defining without being clumpy.

“It lengthens and darkens the hell out of your lashes without any clumping!” -Kaitlyn

“I love love LOVE Tarte’s Tarteist mascara. Even though my lashes are naturally long, it makes them look even longer and thicker like false ones! ” -Marlie

“It makes lashes super long and separates them really well, making for an elegant look. ” -Caitlin

This mascara is great if you’re looking for a natural look that still gives length and definition. It’s also infused with Argan Oil and adds extra nourishment and shine, and it’s available at drugstores.

“The scent is amazing! It’s the perfect everyday mascara in my opinion. ” -Judy

“I like that it has a light scent to it. Overall I like that it is build-able and I have not noticed any flaking. I would definitely purchase again. ” -LeAnn

“Lovely smell, and not a hassle to remove (so important to me!). ” -Savannah

This is the only mascara that claims to be like “skincare for your lashes”. It sounds gimmicky, but it has a ton of great reviews! It uses what they call Elastic Stretch Technology and it provides volume, length, and everything a girl wants in a mascara.

“After years of trying hundreds of mascaras, I found one! IT Cosmetics Superhero. It keeps the curl, doesn’t smudge and washes off easily. ” -Carola

“I love it because it gives a lot of volume, curls my lashes, doesn’t flake, and doesn’t give me raccoon eyes.” -Tania

You can take this mascara from a natural look to a dramatic one by layering. It promises a lot of length, but also to hydrate and strengthen your lashes with nourishing ingredients such as coconut oil.

“I always go back to this one. It’s perfect for my short lashes.” -Patty

“My favorite cruelty-free and vegan mascara is Pacifica’s Stellar Gaze mascara! It doesn’t clump and it stays on all day!” -Kori

“It has no fallout and isn’t clumpy. It gives my lashes both volume and length.” -Jane

This mascara doubles as a primer. You can either wear it on its own or under another mascara, and it “plumps, protects, and preps” you lashes. It’s a great option for those with sensitive eyes.

“It lengthens my lashes and separates them, making it appear like I have false lashes on. The wand won’t smudge my lids since I have small eyes. ” -Lisset

“It builds easily from natural but noticeable (1 layer) to more dramatic (2 or 3 layers). It doesn’t clump, separates well and it’s easy to remove. It’s also a primer and mascara in one. Can’t imagine any reason to change at the moment.” -Bev

“As a primer, it’s the best primer I’ve tried. I also love that you can wear it on its own and it looks great.” -Debra

This is a lengthening mascara that also separates and thickens lashes. 100% Pure products are also pigmented with real fruit extracts, and they contain natural and organic ingredients.

This mascara is not vegan-friendly as it contains beeswax, but it’s advertised as vegetarian-friendly.

“It does not flake, smear, or wind up under my eyes after a full day of wear, and it’s made with organic ingredients.” -Natalie

“Love this mascara! Very lengthening and it’s available in a few different shades. The dark brown one is my favorite since it looks more natural.” -Jessica

This one is advertised as a 24h mascara, meaning that it’s meant to be long-lasting. It also has a “3-in-1” brush which “lengthens, curls, and coats every lash” for a dramatic look.

“I’ve tried many cruelty-free mascaras and they don’t do anything for my skimpy lashes. This one has a uniquely shaped brush and flexible wand that pulls every little lash out of hiding.” -Sandra

“It separates every lash while giving them thickness and volume. I also noticed it lasts so much longer than other mascaras I’ve tried. ” -Amanda

What’s your favorite cruelty-free mascara? Let me know in the comments!